Most of them were reported with underlying health conditions, including hypertension, diabetes, hyperlipidemia, heart disease, kidney disease, and lung disease. Two of the fatalities did not reportedly have any health conditions.

Of the new cases, 1,814 were found in hospitals and medical services (which includes contact tracing cases), 541 were from a proactive approach at previously reported clusters, 640 were from prisons, and the remaining five were imported cases.

Regarding the non-prison local infections, the highest numbers of patients were reported in Bangkok with 872, followed by Samut Prakan with 336, Pathum Thani with 202, Samut Sakhon with 163, Nakhon Pathom with 88, and Ranong with 76.Chonburi reported 50 new and confirmed domestic infections this morning. 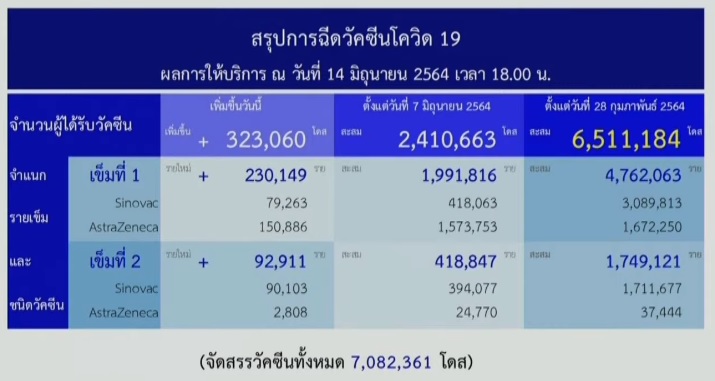 90,103 people had their second shots with a Sinovac vaccine and the second dose was given to 2,808 people with AstraZeneca, marking a total of 92,911 people.

As of today, 4,774 people fully recovered in the past 24 hours and have been released from field hospitals and quarantine centers. Thailand has now reached a total of 202,264 cases with 162,718 recoveries and a total of 1,485 deaths since the start of the pandemic.

As of yesterday, British ex-pat and blogger Richard Barrow had mentioned a leak of personal information of Covid-19 vaccine registered applicants on thailandintervac.com. All of the personal details could also publicly access and be edited without logging in, according to his tweets.

Shortly after being notified, the authorities had taken down the website in the afternoon. The site has turned back on as of last night and opened for registration again.

The Office of International Cooperation, Department of Disease Control, and Ministry of Public Health had also provided an update with an apology to the blogger, reasoning that the website was in the process of developing and revising to support more registrations at the same time when the problem occurred.