The Thai Food and Drug Administration (FDA) on Friday, October 21st, ordered a sales suspension of all Mie Sedaap instant noodles from Indonesia, after they allegedly detected ethylene oxide, a substance commonly found in pesticides, in Mie Sedaap flavours sold in Thailand.

The FDA conducted the tests after the Singapore Food Agency reported the presence of ethylene oxide in Mie Sedaap Korean Spicy Soup instant noodles and Korean Spicy Chicken instant noodles on October 6th. Later, the Thai FDA initially stated that the exact flavours were not imported to Thai market.

However, the flavours sold in Thailand were initially taken for tests. Two lots of Mie Sedaap Korean Spicy Chicken, one dated 25 Nov 21 and expired 25 Nov 22 and another one dated 07 Dec 21 and expired 07 Dec 22, reportedly found the presence of the dangerous substance.

The FDA then ordered the Ministry of Public Health to monitor the distribution of all of the eight flavours sold in the Kingdom while tests were undergoing upon the remaining flavours. The company distributor was requested to issue the suspension of the sale of instant noodles until the results of the analysis were confirmed. 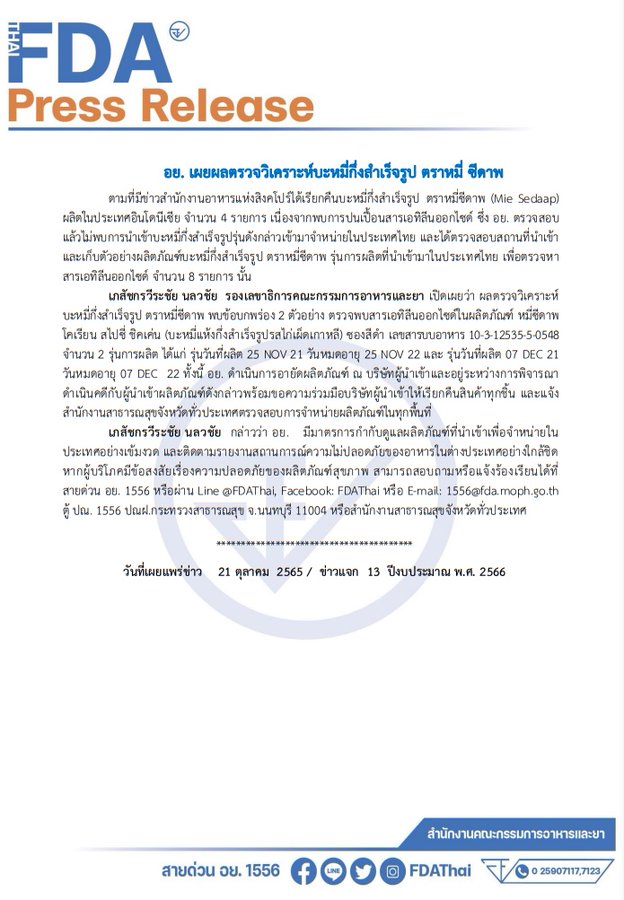